John Cullinane (see http://en.wikipedia.org/wiki/Cullinet and http://www.cullinaneentrepreneurship.com/) is one of the global software industry's pioneers.  He was the first person to develop a "software product business" large enough and successful enough to be listed on the US stock market.. in fact listed with a billion dollar valuation.

I've got to know John via Alpha Software, the business behind the software development platform which enables Start Software to build world-class web and mobile applications quickly and professionally.

Last Monday I went to Belfast to hear John deliver a fascinating lecture on the role of the economy in conflict resolution around the World.  John was appointed by Bill Clinton to lead a business/economic task force during the Northern Island peace process and is still heavily involved in that process today.  In fact, during the lecture he was thanked for his personal involvement in the Gasworks development in Belfast (which, co-incidentally, was where I had gone for my morning run).

John delivered his lecture to an invited audience of the great and the good (and me!).  I was delighted that John picked up on the possibilities that mobile and web development has in a growing economy like NI's and was even more thrilled when he gave Start Software and me a name-check half-way through his talk.  He sees our business model here at Start as being one that could be replicated elsewhere and referred to the work that I'm doing personally in NI to help them in this area:

"Robin Bennett and Start Software would be outstanding models to emulate in Northern Ireland in my opinion. That's why I was so pleased that he was able to join us today. He confirms that it would be possible for NI to become a world leader in mobile application development using Alpha Software's new Alpha Anywhere platform and he is prepared to help them do it".

Thanks John for the mention - really appreciated it.


Here's a press clipping about John's talk (at the bottom of the page): 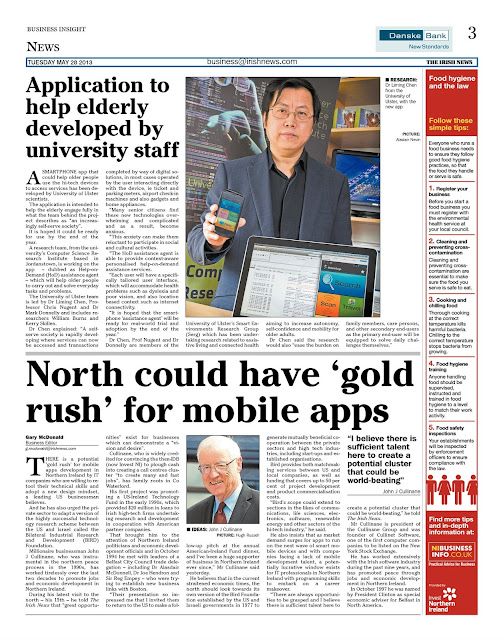 Posted by Robin Bennett at Start Software at 14:58