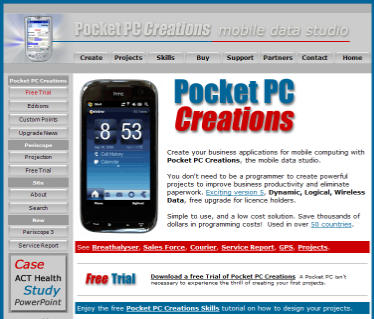 The pocket PC mobile data capture/transmission framework we use for all our systems is currently being upgraded and we have been given a "beta" copy to check and test.

Currently known as Pocket PC Creations (and which will be called Mobile Data from v6 onwards), the software gives us the features we need to provide ultra-reliable data capture applications in many of the software systems we build.

The new release has many new facilities and it will work better on the new units with high resolution "capacitive" screens (like the HTC HD2).

For more information, contact us via the usual methods.
Posted by Robin Bennett at Start Software at 22:21 No comments:

We're upgrading all existing Tracker support clients now so that their survey reports are fully compliant with the new Survey Guide (see http://books.hse.gov.uk/hse/public/saleproduct.jsf?catalogueCode=9780717663859).

Please do contact us if you have any queries about the upgrade process.
Posted by Robin Bennett at Start Software at 15:54 No comments:

Windows Phone (which used to be called Windows Mobile and 14 other different names) has suffered at the hands of RIM with their Blackberry units, and Apple with the iPhone. Windows Phone has started to look very old fashioned with the result that consumers and phone manufacturers have voted with their feet.

Windows Mobile 6.5 (the newest release currently available) was barely more than a sticking plaster, and some industry gurus have wondered whether Microsoft actually had a future in mobile devices.

Well, it looks like there is life in the old dog yet as the first viewing of "Windows Phone 7 Series" (only Microsoft could come up with a name as bad as that) was shown at the technology show in Barcelona this week.

It looks fantastic, really ground-breaking, and is sure to give even the iPhone a scare or too.

We have been developing software for Windows mobile devices since they first launched, and one issue for us is that Windows Phone 7 Series will not be able to run older software - which means we'll need to rewrite all of our existing systems.

Another concern is that the launch presentations were aimed directly at the iPhone user - someone who users they phone primarily for personal/entertainment/social networking and perhaps also uses it to pick up work emails etc. Current Windows Phones work very well indeed as Exchange clients and so are popular in business. Will this one be? This article explains this well.

Windows Phone 7 Series devices should hit the shops and the mobile networks towards the end of the year.
Posted by Robin Bennett at Start Software at 08:09 No comments:

This is a minor bug-fix release which displays better messages when a user tries to delete a "read only" file from the document library and so therefore cannot be deleted.
This release also provides additional instructions to the user to help them to find documents in their library through the use of the browser's Find facility.
Posted by Robin Bennett at Start Software at 07:23 No comments:

For staff working with asbestos, it also enables the storing of personal exposure monitoring records including
- automatic calculations of exposure levels
- auto-flagging when > 4f/ml

If you are interested in receiving this module (free of charge to customers with support contracts), please contact the office.
Posted by Robin Bennett at Start Software at 17:57 No comments:

OHS were Start Software's first Tracker customer and have been leading the way in asbestos surveying technology ever since.
With the issuing of the new asbestos surveying guidance, OHS are changing the way that their asbestos reports are developed to meet the new code - and are also taking the opportunity to revamp their report format.
As a subscriber to our Premium Support service, OHS receive priority over other customers and receive other benefits including regular account management visits.
Posted by Robin Bennett at Start Software at 07:45 No comments:

Some useful new features have been finalised in the latest Tracker Web Server update.
You can now allow or disallow your clients access to the following facilities:
- uploading their own documents to the document library
- deleting their own documents (with confirmation)
- creating their own sub-folders.
In addition, you can also allow or disallow the facility for clients to upload documents to the action and inspection sections of the site (on a client-by-client basis).
Please contact the office if you would like this update.
Posted by Robin Bennett at Start Software at 16:28 No comments:

We've started working on a crop planting software system for International Energy Crops that will combine mapping and database technologies to track the preparation, precision planting and harvesting of Miscanthus biomass fuel. A 5km square area of Miscanthus crop will produce enough electricity to power 9,000 UK homes for 1 year.

International Energy Crops are based near Market Drayton in Shropshire and are Europe's largest Miscanthus Rhizome Multiplier, having at least 8 times the Rhizome capacity of their next nearest competitor.
Posted by Robin Bennett at Start Software at 15:41 No comments: 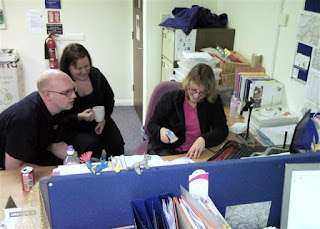 We're just back from two long days down in Truro and Bodmin installing Toy Tracker (our software for managing toy libraries) at Cornwall Council and doing the first training sessions for the North Cornwall group of libraries.
Toy Tracker has been configured to run on Citrix using a county-wide SQL database with PC, laptop and pocket PC access to the system. The system is also fully barcoded to make it easier for volunteers and occasional users to book toys in and out.
Next visits are in 3 weeks time when we extend the training to other sites.
Posted by Robin Bennett at Start Software at 11:28 No comments: