Dan's "faces on diary" technique showcased on the Alpha blog

One the new features in Alpha Tracker's diary (the web version of Resource Tracker) is that appointments are shown with a thumbnail photo of the staff member to make reading the diary at a glance so much easier.

This was a feature that Dan coded and his technique has been publicised on the Alpha Software blog:

Nice one Dan!
Posted by Robin Bennett at Start Software at 21:13 No comments:

We've been trialling Office 2013 here at Start to make sure that it is compatible with Tracker and our other software products (see this link for details of our testing) .

I personally spend most of my day in Outlook, reading and replying to emails, actioning tasks and organising my diary.  Outlook 2013 is pretty similar to Outlook 2010 but has a new look - very white and very "tablet" in style.

You wouldn't think that removing colour from a screen would make much difference, but - in fact - it has somehow made it really tiring on the eyes to use.  Other people have found the same thing and there are hundreds of posts on forums with people complaining about the same thing.

Microsoft responded by adding a couple of colour options to the final release version of Outlook 2013 but they made virtually no difference and using Outlook 2013 with my old eyes for more than an hour or so is almost painful!

There is also another change to Outlook 2013 which is a real pain and frankly bizarre.  With previous versions of Outlook you could use the Windows Start menu's search box to search your emails, appointments and tasks.  That's what the search box is there for?  In Outlook 2013 they have removed the feature with no explanation and no way of switching it back on!  Again, hundreds of people have spent time posting messages on Microsoft forums to complain and ask them for a solution with no response.

So, having persevered for 3 months, I've finally given up and switched back to Outlook 2010.  What a relief.  The fonts look better, the screen is clearer, I can search more easily and the whole experience is better.  As a self-confessed nerd and "early adopter" I can't believe I've gone backwards and switched from Windows 8 back to Windows 7 and from Office 2013 back to Office 2010 but they are simply better products.  Microsoft is losing the plot and losing ground (and sales) to Android (Google) and iOS (Apple).  No wonder and it will take some real common sense and strong leadership at the top of Microsoft to turn things around.

Posted by Robin Bennett at Start Software at 10:08 1 comment:

This is a major release of Resource Tracker Sync with a number of new features, improved performance and increased reliability when communicating with Google servers.


If you are a Resource Tracker Sync user and would like the latest update, please contact the office.

Posted by Robin Bennett at Start Software at 20:01 No comments:

This is another bug-fix and minor enhancement release.

The key improvement is that there is more intelligence now in the numbering of the vertical axis in charts created by Tracker Dashboard - this is especially useful when displaying percentages which are all very high or very low. 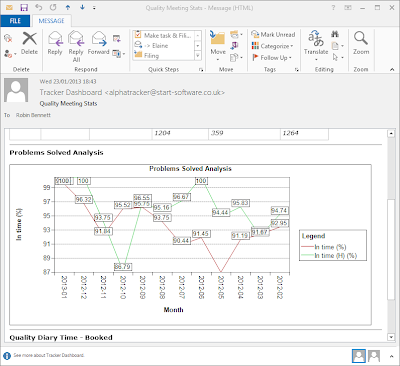 Please contact the office if you would like this update.
Posted by Robin Bennett at Start Software at 19:53 No comments:

Kim & I have just analysed our problem stats for December and we've had another excellent month.

All urgent problems logged were solved on time - 100% - and we're on track to deliver the same performance this month too.  Looking across all problems (including low and medium priority), we were in time 96.31% of the time which is still very good especially when you consider that we had 163 calls for assistance logged last month.

If you want to see the analysis for yourself, go along to http://www.start-software.com/support/performance-charts/.

Posted by Robin Bennett at Start Software at 12:56 No comments:

This is an ideal smartphone for surveyors with its big screen (5.3") and built-in stylus.

The Galaxy Note has all of the standard Android smartphone features and also has an especially large battery, ideal for busy asbestos surveyors or health & safety professionals using Tracker and Tracker Mobile.


You can read all about the Samsung Galaxy Note here.
Posted by Robin Bennett at Start Software at 12:03 No comments:

We're still suffering from snow-related travel problems here in the Midlands today so please bear with us.

We have phone cover on the support line - 0845 612 2402 - so please call problems and queries in as usual.  You can also log them via the Start Software client portal.

Thanks for your understanding.
Posted by Robin Bennett at Start Software at 10:04 No comments:

This is a bug-fix and performance release with a number of incremental fixes and improvements.

It also has some client-specific functionality (ref B-02285).

Please contact the office if you would like this update.
Posted by Robin Bennett at Start Software at 18:07 No comments:

v1.0.18 of our Tracker Exporter utility in now on general release.

This update has improved the performance of large Tracker exports and is available to all customers with active support plans.
Posted by Robin Bennett at Start Software at 14:20 No comments:

This is an important bug-fix release following on from the recent launch of Tracker Dashboard v1.0.127.

Please contact the office to get this release.
Posted by Robin Bennett at Start Software at 12:39 No comments:

Only Dan has made it into the office today and so we are running a reduced service.  Sorry for the inconvenience.

Please call in to log problems as normal on 0845 612 2402 or use the customer portal.  We will do our best to respond in the normal timescales.

Thanks for your understanding.
Posted by Robin Bennett at Start Software at 12:04 No comments: 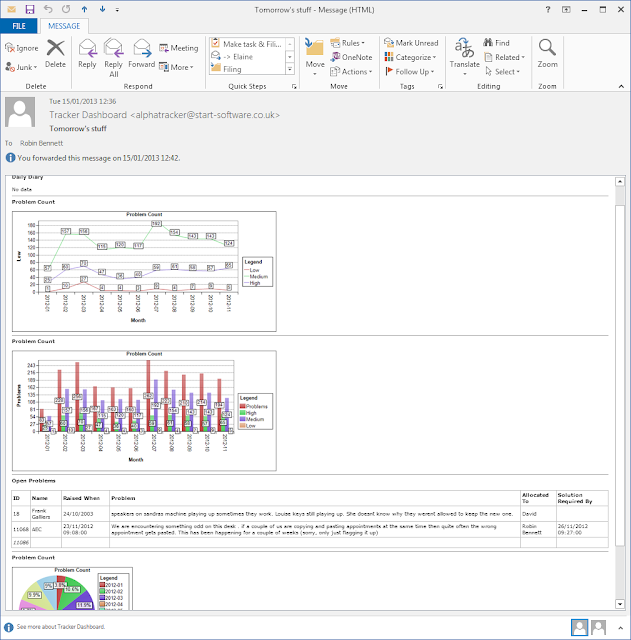 This upgrade is free of charge to all Tracker Dashboard customers with support contracts.  Contact the office if you would like this update.

Posted by Robin Bennett at Start Software at 13:32 No comments:

We've just received stocks of the brand new HTC One SV which is perfect for surveyors.

The HTC One SV has all of the latest features including:


We're selling these in packs of 10 @ £290+vat per phone (so £2,900+vat per 10).  These are SIM-free phones meaning that they will work on any UK network.  If you are on T-Mobile/Orange/EE then you can also access the 4G network where available.

Contact Elaine to place your order.
Posted by Robin Bennett at Start Software at 09:33 No comments:

Open letter to all Tracker customers - Tracker 10 years on

The New Year is always a good time to reflect & plan and this year is especially important for us because it is the 10th anniversary of bringing Tracker to the market.

We’ve been at the top of the asbestos consultancy industry for a decade now and we intend to continue for another 10 years more (at least!).

2012 saw some huge changes to Tracker including:

- massive improvements to Tracker Mobile including mix-and-match support for iPhones, iPads, Android tablets & smartphones
- new features in Tracker Dashboard giving you the information you need to run your business delivered direct to your Inbox
- a brand new module – Tracker Filer – acting as an extra pair of hands, filing emails and attachments in your Tracker system
- new options and facilities within Tracker Web Server connecting you to your customers better than ever before
- the option to record lab data directly on iPads within Lab Tracker
- another new module – Resource Tracker Sync – to give you the option of synchronising your Resource Tracker diary to Google or Exchange calendars.

You can read all about the Tracker modules here http://start-software.com/tracker/modules/.

Our next plans include a fully “cloud” based version of Tracker (called “Alpha Tracker”) which we’ve been working on for 9 months now and launching this product into a number of foreign markets, starting with Australia.  There is some early information here: http://start-software.com/tracker/modules/alpha-tracker/.

We know we’re not perfect but we continue year on year to improve our service to you and we continue to improve our helpdesk (see http://start-software.com/support/performance-charts/).  At our last ISO9001 inspection we passed with flying colours again which was a testament to my team’s continued hard work.  We’ve also launched a brand new portal for you, our customers, which enables you to have direct access to the information about projects and problems we are working on for you.

For our business to continue to grow we need to keep our existing customer base and build upon it with new companies coming on line with Tracker.  This year has seen a number of new Tracker users including some of the industry’s biggest consultancies as well as some of the smallest too.  What is really satisfying is that surveyors leaving existing Tracker businesses and starting their own businesses often ask us for our Tracker Lo-Start system – Tracker genuinely is popular with directors, management and surveyors alike.

We are now working to complete Alpha Tracker whilst starting a new project in conjunction with the University of Wolverhampton to bring “smart tag” RFID technology to the asbestos consultancy market.  If you are interested in being the first consultancy to use this exciting new technology, get in touch and I can explain what it could mean to your business.

Thanks for reading.  Don’t forget to check our website regularly at www.start-software.com or – better still – follow the blog at http://blog.start-software.com so that you will see the weekly announcements about new Tracker developments.

Here’s to another 10 years.

Posted by Robin Bennett at Start Software at 13:14 No comments:

When displaying multiple staff on the new Web Resource Tracker the system colour-codes the appointments to differentiate them between different staff, but when lots of staff are added it isn't always easy to see who is doing what.

We've added a new option to enable you see thumbnail photos of the staff to make it easy!

PS Please don't blame us if your team is not very photogenic...
Posted by Robin Bennett at Start Software at 13:18 No comments: