HTL's system works end-to-end in their successful business, from quotation right through to invoicing.  Microsoft Access has had sufficient capacity to support their growing business until now but collectively we felt it was time to develop a more robust, expandable and better performing system using Alpha Anywhere from Alpha Software & SQL Server from Microsoft.

We took the approach of developing the replacement system alongside their Access system, with the same Access back-end database being accessible from both.  This meant that staff could use the web-enabled Alpha Anywhere version for increasingly more operations whilst still having the old Access-based system to fall back on if necessary.

Once all the development was complete, we were given the OK to switch off the old Access front-end to confirm that all necessary functionality existed in the new Alpha web-enabled front-end and - after two weeks of successful running - we migrated the data from Access MDBs to SQL Server to complete the system development. 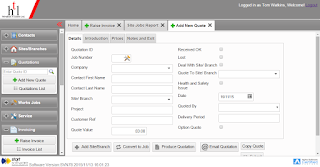 It was a good development for new developer Tom to get his teeth into and HTL are very pleased with the result - a new, web-enabled software system with increased speed and reliability.  And HTL clients may now access to data via the web and via Android, iOS or Windows apps.

Good result all round - thanks to Tom's professionalism and the flexibility and power of Alpha Anywhere.

If we can help you to move a system from Access to Alpha, get in touch.

Posted by Robin Bennett at Start Software at 15:10